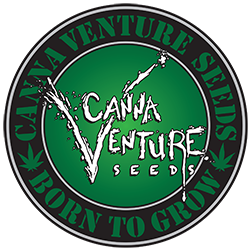 For the CannaVenture Seeds 10th Anniversary Drop, We want to show our appreciation for all of the support and love we’ve been shown through out the last decade by releasing an amazing line up with a more affordable price that differs from our normal retail prices. Thanks to my friend Jaws, many of you know who he is, and if you don’t, google “Jaws Gear”, he’s been in the game a long time and has amazing genetics. Thanks to Jaws, I got the chance to run a legendary cut, that’s been on my wish list for many years. He gifted me The Legit Arcata TrainWreck clone only, genetics I have worked with for years now, but was super stoked to have and work with the clone only. Arcata Ghost FEM was made by reversing the Ghost OG clone only to pollinate the Arcata TrainWreck clone only. The results are better than I even hoped for. Huge yielding, super potent, super loud, limey funk flowers completely drenched in trichome production. It’s a sativa dominate line, with potency testing out around 25% to 30%. Arcata Ghost FEM is a Must if you are a CannaVenture Seeds supporter. It will be one of the most unique and amazing lines you will ever grow. Straight Up! Its also a great choice for concentrates, the over powering lime funk shines through from the nose and the taste on the exhale. If you told me, you can only get 1 pack of gear from this 10th year Anniversary Drop, I would suggest you purchase either the Arcata Ghost FEM line or the new Albert SuperTramp FEM line. Both of those lines are That great!
(Tip : odor control is a good idea)